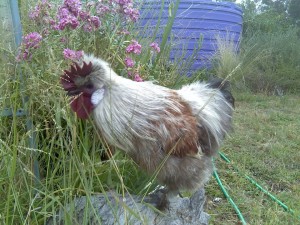 Cooper my most treasured Chookie mate

This little mate, Cooper or Coopy, was sadly beheaded by a fox,(beheaded in true Alice Cooper style) on 25.01.2012…I got up in the morning and went to the Chook pen, opened the gate and off they all ran…we are free to range and enjoy our chookie life here at Dingo Dreaming. Copper now the head rooster after Gem, (our very protective kick boxing rooster was bitten by a Eastern Brown Snake on the 8th of January 2012. He is another story for another day.) was after Hawkwind that day, he was so full of lust he wasn’t paying attention to anything else but her…the fox was.

Foxy had probably been casing the place for a while and got to know the routine. New the dingoes were enclosed. Also new Cooper was at a disadvantage with only sight in one of his to inquisitive eyes(Gem his half brother had seen to that,excuse the pun) I had also had to amputate one of Cooper’s wings myself.

As a young chick he and his hatcher got stuck together,separating them damaged the wing, as Denham was a huge Orphington. he, only a few day old silkie chick, his surrogate Mum so big, things could have been worse and Cooper and I would not have had the wonderful shared, short time together. From that day I was Cooper’s mother hen(or smother hen,he got heaps of cuddles). It was then we started eating meals together, the older he got the cheekier he got. stealing from my plate.(maybe he learnt the stealing from the dingoes, they love stealing things) Sitting on my shoulder, while I’d do all matter of things.

He would come out to town with me when I couldn’t take a dingo. We would have lunch at the Station and Bondini’s in Maryborough. He would be spoilt by Jack at the Dove cafe in Castlsemaine. We would together drop in on Liz and Alison Saddler where he would sit-up in his basket in their lounge and lap up posing for photo’s and all the complements he could get. Their neighbours would come over to see him,he had quite a fan club.

I’d got him a nappy so he was able to walk inside and not fertilise the floor, he was also training to walk on a lead.(yes they have Nappies and leads for chooks,citychicks.com.au can help you with that)
Cooper also visited the Dingo Discovery Centre, met Elaine Kirchner from the Forte Wayne Childrens Zoo, Indiana U.S.A. whom checked his sore wing and said it would be fine. (2010 so that means we only had 2 years together) Until he re-ijured the wing when it was nearly better and I performed a very successful amputation.

Coopy nearly stole the dingoes glory that day at the Dingo Discovery Centre. He got lots of cuddles and I think got a little of everyones meal. He has been greatly missed and I still missed him snuggling up when I cuddled him. Marilyn his girlfriend, that he’d invite into his inside the kitchen sleeping quarters,wooing her with little sounds that were to say how comfy his nest was. Marilyn missed him so much, she’d sit by the dingo pen and sulk…Mirii actually got to eat a chunk of her, we raced to the Maryborough Veterinary Clinic and with some antibiotics frequent cleaning with colloidal silver she got better( it would have been the equivilent of a shark bite to a human,you could see how the feathers grew from underneath her skin.)

The dingo enclosure has a barrier now that prevents close encounters with chooks. Very sad she had ccccoa quite painful disease in recent times and this time the vet was unable to save her, she died horribly and violently from it about 15mins after returned to the Vets. We miss her dearly but she never recovered from Losing Coopy either. Cooper will forever be in our hearts I still tear up for him so often. I was able to retrieve him from the stunning bastard of a fox, so I could bury him in the garden and give him a proper funeral.I looked the fox in the eyes and hysterically told him what he had done, and that Cooper was one of the most wonderful creatures you could ever meet, despite being a roosAter with rooster traits.

He was sweet and even romantic sometimes to Marylyn. I think the fox got an awful shock when it discovered how upset he made this human. I couldn’t have killed the fox even if I did have a gun. The fox was only being a fox. They are as clever as any dingo, so as upset as I am I still get absolutely besotted when I have a close encounter with a fox. At least my beloved Cooper got to enjoy his short treasured existence and was able to be a chook, when he wasn’t hanging with the humans.

I could of kept him cooped up(another pun) and he may still be with us. But…his life would have been miserable, like a human that was innocent of a crime being locked in jail.
Coops…thank you so much for being you and a part of my life and our dingo family xxxxx